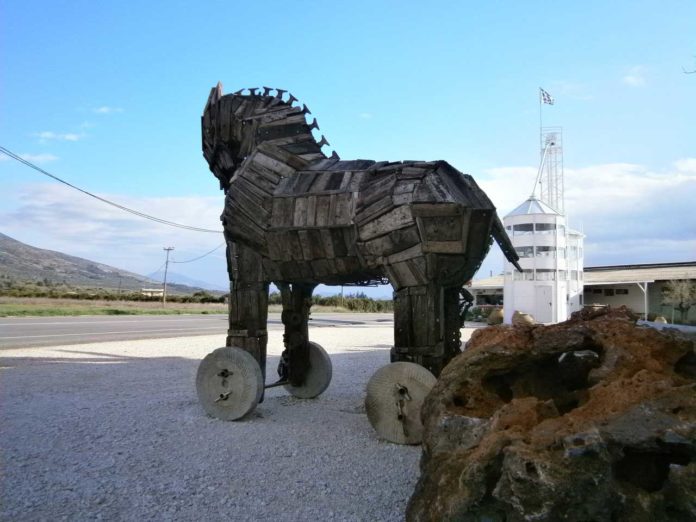 The Trojan horse is “hallmark” for Stelios d. Maragkos from and the Silo Art Factory. It is constructed from a side of old wood and on the other from old metal parts. The height and length of up to 3.5 meters.

The idea of Stelios was born 12 years ago, when he visited for first time the premises at which he was going to create the Silo Art Factory. There was a large screw. In his mind began to create the image of a giant Trojan horse, in which the bolt would be the tail. Starting to implement the idea of and setting the wheels, the size of the startled, as he admits. The artist’s experience was great, but had to put with a beast 12-15 metres!

Do not put it down. Decided to implement the first “little” brother, who only small it cannot be considered. Indeed, it took to tear down part of the wall to fit to come out of the lab. Work, i.e., as a true Trojan horse, after Similarly the Trojans were forced to tear down part of the walls to get inside the city. Here you can read the actual history of the Trojan horse.

The result excited Stelios and his associates, who have worked endless hours to “build”. So, now, is determined to proceed with the original idea and build a Trojan horse with unprecedented size.

sword, knife made of bronze and glass, hand made inspired from the Greek antiquity, [the glass needs to be repaired, grinding]