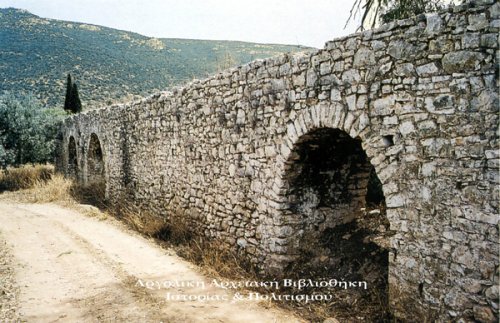 The watermills and windmills in our County, humble, ruined and abandoned today, are important monuments of pre-industrial with multiple significance, historical, architectural, economic, social, and folk. The search, identification and cataloging of the mills of Argolis – that lasted about two years – brought to light 185 Mills (131 watermills and windmills 54) located in 57 towns, villages and settlements of the prefecture. Apparently they were others who were not identified.

The forgotten buildings, which are not easily arouse the interest, looked at the outskirts of villages, but mostly out of them, in deserted – basically- areas, in rivers (mills) or on hills, as well as in lowland areas (windmills). Some of these buildings hold on their bodies with difficulty, others are bent by the weight of time, others give their mark with a stone stack, while some – unknown how many – not left any trace of them, collapsed taking with them their secrets and only the name betrays their existence (e.g. Paliomylos, Mylolaka, Mylorrema, mill, etc.).

Scattered throughout Argolis, mills make up in several  mills-areas. These are groups of mills that were operating as a team using the same power provided by the successive exploitation of water of the same river. Eight watermills were concentrated at Kefalari, eleven along the stream that connects Dimena with new Epidavros, eight in Froysioyna, seven in Kefalovryso, eight at torrent Xobrios of Kiveri to Andritsa, seven in Karya, seven in Prosymni, five in Achladokampos, five in Ano Epidavros, four in Tziristra and in Karnezeika at torrent Rado, while on the outskirts of dozens of other villages functioned at times from one to three mills.

On the road that joins the New Epidavros, Dimena is located with the water mill, which was restored with faithful devotion to the traditions, thanks to the love and passion of Elias Kaperwni.

The mill operates with facilities that slew the great fan, so she in turn to transfer traffic to grinder mechanism with the millstones.

The site works and Folk Museum, while you meet an entire meal production workshop, pligoyrioy, but also grape wine press, Aloni, mixer, oven, magkanopigado and others.

Upon request, carried out a tour that lasts about an hour and a half, with representation and participation of all in the production processes.

Then guests can in places properly designed with natural materials such as stone and wood, to eat, to drink coffee or cool down with a freshly squeezed orange juice.

The Ministry of education and religious affairs, Culture and Sport proposes on page e-yliko.gr educational visit to the watermill of new Epidavros.

The top place in Europe to travel in 2016: The Peloponnese...